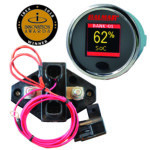 What is the difference between State of Charge (SoC) and State of Health (SoH)?
State of Charge (SoC) is the battery bank’s current charge relative to its current capacity.  State of Health (SoH) is the battery bank’s current capacity compared to when the bank was new.  As a battery bank ages, it loses capacity over many discharge cycles.  As such, its State of Health (SoH) declines over time.  Both State of Charge (SoC) and State of Health (SoH) are expressed as percentages.  For example, if a battery bank has a 100Ah design capacity and its State of Health (SoH) is 90%, then only 90Ah of capacity remains in the bank when it is fully charged.  If the State of Charge (SoC) for this bank is 50%, then only 45Ah of capacity remains.  State of Charge (SoC) provides an indication of when your battery bank needs to be charged.  State of Health (SoH) provides and early warning indication of when your battery bank needs to replaced.
My SG200 won't update or when it does it gives me erroneous data. What do I do next?
The SG200 firmware update routine requires a very specific protocol.  Please conduct the following steps: 1) Ensure that you have the latest software update from the Google Store or iPhone Store. 2) Shut down the APP on you phone. 3) Pull the fuse on the red power wire to the SmartShunt, wait 5 seconds, then replace the fuse  4) After the Display comes back on, conduct a Network Reset from the Display, then check for devices to be sure that every device is present. 5) Proactively “kill” the APP on your phone, then restart the APP. 6) Try the update process again, using only the phone APP.  Use the following device update sequence: a.  Update Bluetooth (You must do this FIRST!!) b.  Update Display c.  Update SmartShunt and Battery Chemistries 7) Once the update is complete, then reset the Battery Type and and Capacity.  This will load in the latest Battery Chemistry contained in the update. 8) You may need to pull the fuse between device upgrades, although a network reset is often enough. If you cannot update no matter what you try, consider running a XECHO test between the Display and SmartShunt, and/or move the Buetooth Gateway to plug directly into the SmartShunt.
I want need to put my vehicle or boat in storage for a few months - can I disconnect the SG200? What should I do when I put it back into service?
Firstly, it is a good idea to remove the fuse powering the SG200 when the vehicle or boat will not be used for an extended period of time. However, you don’t want to do this after every weekend of use, as the product needs to be powered 24/7. If you do this, the performance of the battery monitor will suffer, and will likely not provide good readings when powered up. Having said that, it is fine to disconnect for an extended layup of more than a few weeks. In this case, simply pull the main power fuse on the positive lead to the main battery bank. If you have the auxiliary leads connected, there is no need to pull those fuses. When you wish to put the SG200 back in service, install the fuse before you turn on any charge sources or loads. Assuming the SG200 had learned the batteries before the fuse was pulled, you should get a reasonable SoC value after a few minutes. You can use the system as needed after about 5 minutes of the batteries being monitored “At rest.” It should be noted that this is a distinguishing feature of the SG200 – all other shunt-based battery monitors will assume the battery is fully charged and show 100%. The SoH value will show dashes until a full charge cycle has been performed.
Can I use the SG200 with two different chemistry batteries connected in parallel?
The short answer is “No”. Until recently, this type of installation has not been common. However, with the rise in Lithium systems being installed on boats and RVs, a lead-acid battery is sometimes being installed on the same bus as the lithium battery or batteries. From the SG200’s perspective, this creates a hybrid battery chemistry, so electrically it does not look like either of the two battery types.
My SG200 will not allow me to upgrade the devices, and shows the message: Multiple devices of the same type with early firmware release detected. Only one of each device type is allowed on the network while doing updates of these early devices. What should I do?
Original devices can only be upgraded when there is one original device on the network at at time. This affects devices with the following firmware: DISPLAY v.2.00 BANK v.B.04. To upgrade, do the following after ensuring you have the latest app from the Apple iStore or Google Play Store:

You MAY need to pull the fuse between upgrading each device during this process.

Once completed, you should reselect your Chemistry AND reset your capacity to take advantage of the new chemistry profile improvements. If you have more than one SmartShunt or more than one Display, use the rule “Only one original device on the network at a time when upgrading” and you will be able to upgrade all devices. If after performing the upgrades the gateway no longer connects, you many need to turn your phone on and off to clear the bluetooth cache on the phone

This is a one-time issue, as long as you give each device of the same type (Display, SmartShunt) a unique name, you will be able to upgrade them in place going forward.

What are some of the symptoms of bad SmartLink cable connections, and how can I check?
If the cabling between SmartLink devices is bad, it can present in a variety of ways: 1) No power to the Color Display: a. Power wires crossed, or poorly connected. b. Deutsch-type connector is not seated fully. c. Power sockets not seated properly on one or more SmartLink connectors. 2) Screen keeps resetting when the engine is running (vibration causing intermittent connection): a. Same as #1. 3) Data becomes garbled on the Display, the Display freezes (data does not change as actual parameters change: a. Poor data wire connections. b. Deutsch sockets not seated properly in one or more SmartLink connectors. 4) APP cannot successfully upgrade devices, it fails repeatedly. It may also not show devices. This can be due to intermittent cabling if the data or power wires are connected, but have a poor interface to the sockets, like a bad crimp. a. Same as #3.

The Color Display has a network cable testing feature called XECHO, found on the Advanced Menu. . When run, this feature will conduct a network test between that Display and the device that is currently selected (at the top of the Color Display screen.  Possible results are as follows: 1. It shows VEC – only used by Balmar Engineering 2. Loop – number of tests 3. Err – number of errors. If errors are occurring, the network path from the Display to the device being tested is compromised in some way. There may be more than one cable; if for instance you are testing a SmartShunt that is not directly connected to the Display, but there is another SmartLInk device in-between.

NOTE about the XECHO test:  It cannot be used to test the cable of the Bluetooth Gateway. If you run it, you will get errors even if there is nothing wrong with the cable.

My battery is 24-48v, and my charger has a 12v output for each battery in series. Can the SG200 work in this scenario?
Yes it can, with a small change to the installation. Your charger is sold as a 24, 36, or 48v charger, but in reality is is one, two or three 12v chargers in a single enclosure. Each “Charger” is wired up directly to the + and – leads of a single 12v battery. In this scenario, Install the SG200 exactly like outlined in the manual, so it is monitoring the Bank of 24-48v batteries correctly. This means that the power lead is connected to one battery at an end of the string. At the opposite end of the string, the negative leads to your onboard loads and sources are connected to the “Cable” end of the SmartShunt, with a single cable between the negative battery post and the SmartShunt. At the battery the SmartShunt is connected to, you would normally have one of your “12V” chargers connected to the + and – posts fo the battery. Leave the + lead where it is, but ensure that the negative lead is placed on the “Cable’ side of the SmartShunt.

All of the other 12V “Charger” leads are connected to the individual batteries like before. When this is done, the SmartShunt reads the correct system voltage and sees the discharge of the bank as a whole (24V,36V or 48V) .When charging it “Sees” the current flowing into the closest battery to the SmartShunt, but since the system voltage is not 12v, but 24-48V (depending on your installation) it assumes that the current is at that voltage (2-4x the power) Since the other batteries in the string are also receiving the same amount of current at 12V, the math works out!