In comparison, alternators with external multi-stage voltage regulators are able to charge large, deep-cycle battery banks similarly to smart shore power chargers – by modifying charging voltage to meet the changing needs of the battery bank as the batteries become more fully charged.  In addition, a smart regulator can be programmed to match the voltage requirements of a variety of battery technologies, as each battery type has a range of target voltages that ensures a safe and efficient charge profile.

The current generation of Balmar’s multi-stage Max Charge and ARS-5 regulators have an additional feature that is critical to the health of Gel Cell, AGM and other sealed battery technologies.  By adding an optional battery temperature sensor, the installer enables the Balmar regulator to monitor for changes in ambient battery temperature and modify charging voltage to compensate for warmer or colder temperatures.  This allows the charging system to maintain optimal charging without damaging over- or under-charging.  So … is the multi-stage regulator worth the extra cost?  If your batteries represent a sizable investment, the answer is absolutely “YES”.

Belt dusting and early belt failure – Is there any way to avoid it?
By nature, high-output alternators can be brutal on drive belts.  If a serpentine pulley conversion kit is out of the question, are there other ways to minimize or eliminate messy black dust, or belt failures that can lead to a ruined boating trip?  There are a number of ways that belt dusting can be addressed.  The easiest way, when using our Max Charge or ARS-5 voltage regulators, is by adjusting the regulator’s Belt Load Manager.  This regulator adjustment feature enables the user to modify the regulator’s field pulse bandwidth to reduce the horsepower load the alternator applies to the belt.  The wider the pulse bandwidth, the less stress on the belt.

While the Belt Load Manager is very effective at reducing belt stress, it’s always important to ensure that the problem is not a result of wear caused by poor pulley alignment.  Pulley alignment can often be measured by placing a straightedge across the front of the alternator and crankshaft pulleys and identifying any mis-alignments.  In addition, pulleys should be inspected for rust, nicks or other irregularities that could cause premature wear.  Quite often, the source of excessive belt wear can be attributed to the geometry of the crank, alternator and water pump pulleys.  If the amount of contact area between the belt and the alternator pulley is limited due to a less-than-ideal drive angle, the issue can be remedied by replacing the alternator pulley with a larger diameter pulley.  Click Here to review Balmar’s offering of replacement pulleys.

Another effective belt dusting solution may be replacing the standard belt with a higher capacity aftermarket belt.  Notched Vee belts, like those sold under the Dayco Top Cog brand, may provide better “grab” than traditional smooth profile Vee belts, resulting in better power transfer and less premature wear.  Newer belt technologies that integrate stronger, more stretch-resistant fibers may also provide a marked improvement over standard Vee belts.  Even under the best conditions, belts do have a tendency to stretch.  The best way to avoid dusting and premature belt failure is to closely monitor and correct belt tension.  We recommend that you inspect your belts on a frequent and regular basis to ensure that your belt never has an opportunity to loosen and slip.

How do I make my new AT-Series or XT-Series Alternator work with my existing Tachometer?
A tachometer typically measures “pulses” from the stator poles of the alternator to count RPMs.  Since the AT-Series Alternator has 16 stator poles instead of the usual 12 poles, some legacy tachometers are unable to adjust for this difference.  First determine if your existing tachometer is “adjustable” for this situation.  If your tach is not adjustable, Balmar provides a Tach Signal Stabilizer (part number 15-TSS) to adjust for stator pole count differences.  Installation instructions for the 15-TSS are provided on the product page link.
I’ve just installed a Balmar alternator on my Volvo engine and the alarm buzzer and light won’t shut off. What’s going on?
One of the problems we have encountered on some Volvo’s is an incompatible D+ circuit. Some Volvo’s require 2 or 3 amps of current from the D+ circuit to function. Here are some possible solutions:

1. If you have installed a 6 Series alternator on a Volvo engine, you can use an automotive style relay like the TYCO VF4-45F1. Connect the relay as shown in the drawing below to the alternator D+ circuit. Any relay with a 12 VDC coil which draws less that 500ma will work. The TYCO 12VDC coil will not work when connected to the A/C terminal of the alternator. 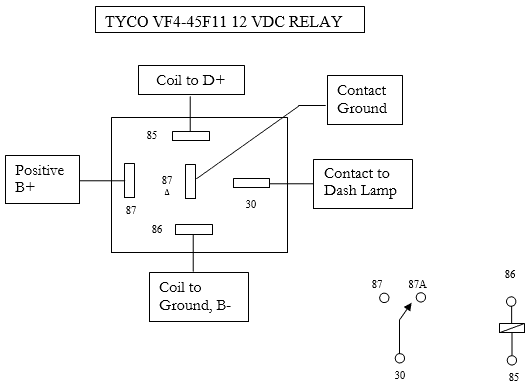 2. If you have installed any other Balmar Alternators that do not have a D+ circuit then you can use a 6 volt automotive style relay, like the Tyco VF4-15D11-C06 or an OMRON LY2 relay. Connect the relay as shown in the drawing below. The OMRON LY2 coil will work when connected to the A/C terminal on the alternator. 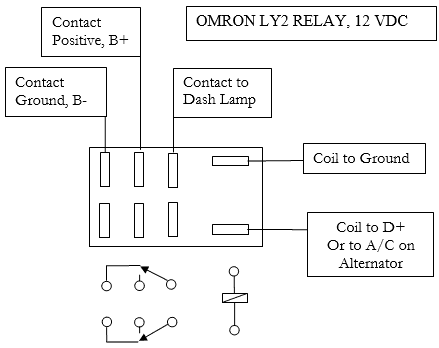